Today I want to take an excerpt from the NY Times daily briefing from this morning. It’s at the very bottom, but here is the part that I want you to read...

When Julia Marcus saw people being shamed on social media several weeks ago for going to a public park during the lockdown, she had a flashback. It reminded her of the shaming of gay men for having sex during the AIDS crisis. And she thought it was both cruel and unproductive.

So Marcus, an epidemiologist at Harvard Medical School, began speaking out intweets,televisioninterviewsandtwo articles in The Atlantic.

I think she’s emerged as one of the most thought-provoking writers on the coronavirus, and I wanted to encourage people to think about her argument.

Marcus is calling for a “harm reduction” approach. People won’t remain shuttered in their houses for months, just as they won’t stop having sex. The key instead, she says, is helping people understand how to reduce their risk of contracting the virus — say, by meeting up with a few (masked) friends in a public park. If shaming keeps them from doing so, they may instead meet indoors, which is much more dangerous.

“The abstinence-only and harm reduction approaches share the same goal of reducing illness and death,” she told me, “but from what we know about H.I.V., substance use and other areas of health, harm reduction is far more likely to work.”

For more, check out an infographic on risk that Marcus and Ellie Murray, another epidemiologist, created; and Marcus’s more recent Atlantic article, which promotes the Canadian idea of “double bubbles,” in which two families agree to merge their quarantines.

Here is the infographic. 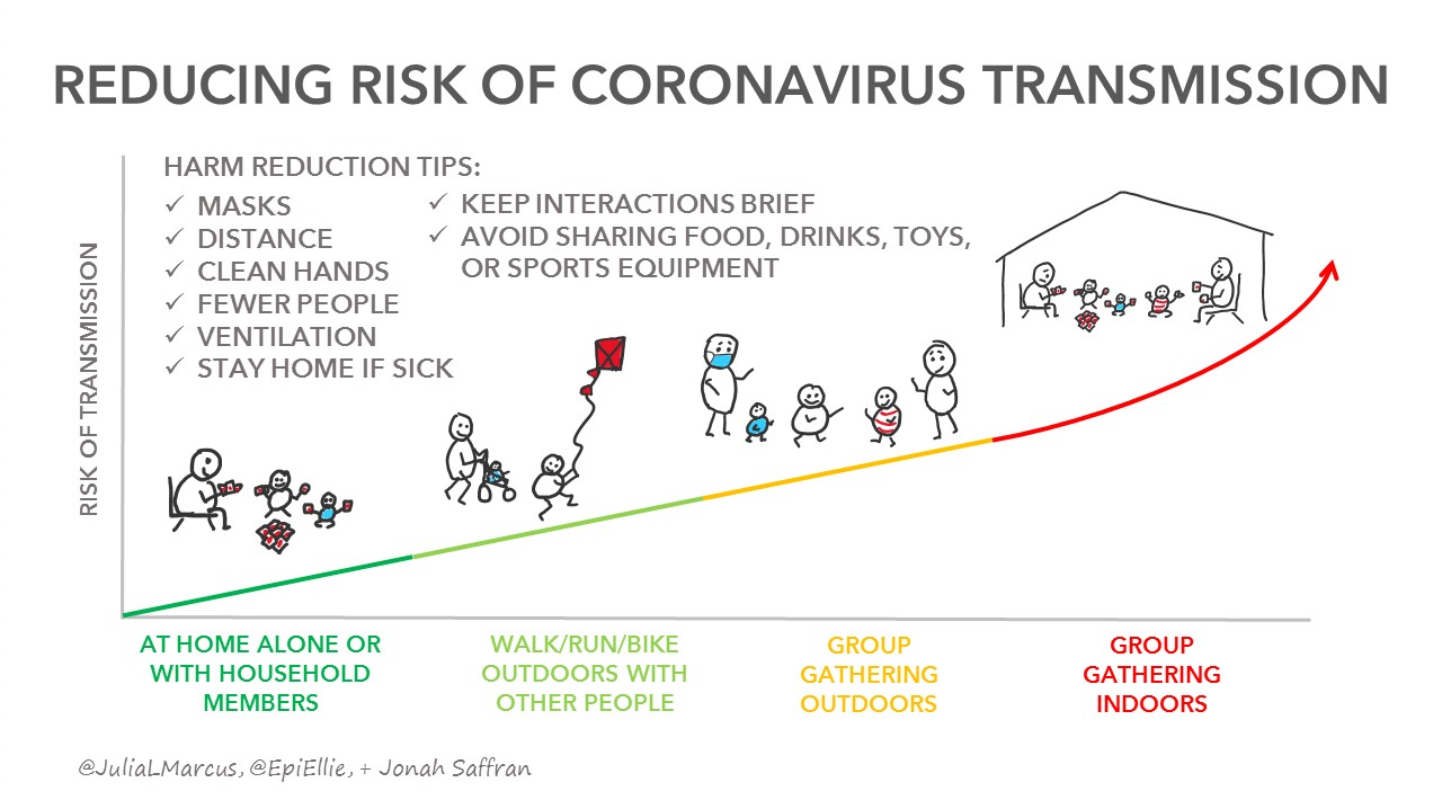 PS: This is a nice article that talks about how we should think about surfaces. It doesn’t change much for me as I don’t think I ever figured it was the primary way the virus was transmitted. It’s a reasonable data point to consider.

PPS: Ever noticed humans are kinda like the cat that wants to be on the other side of the door? BC (Before Corona) we were always like “I’m not sure I want to go out” or “wouldn’t it be nice if we just stayed in tonight.” Now that you “can’t” go out, we are all like “I really want to go out.”

PPPS: This is a great survey of the situation. About 1 month old but still on point and educational. I have read a lot about this virus and it still taught me some stuff. I thought the most insightful point was this quote about how science works:  “This is how science actually works. It’s less the parade of decisive blockbuster discoveries that the press often portrays, and more a slow, erratic stumble toward ever less uncertainty. “Our understanding oscillates at first, but converges on an answer,” says Natalie Dean, a statistician at the University of Florida. “That’s the normal scientific process, but it looks jarring to people who aren’t used to it.”