Is the model already wrong? (Modeling for dummies part 3)

Let’s be honest, we probably maxed out the level of social distancing that our country is capable of tolerating. Additionally, the cost-benefit ratio either did get out of whack or was getting very close to getting out of whack. The Hammer was a beating. But, as we start to navigate the early days of the Dance, we need to remember, the intent was never to get the cases to zero. That ship sailed in January.

The intent of the Hammer was to simply get control of the situation so we could get into a slow burn situation, instead of a wildfire. Yesterday, I mentioned we are likely at least 2 weeks into the Dance and that is likely/hopefully going to prove to be a good thing. But, that will have to be sorted out in the history books and in the thousands of studies that will emerge in the next few years. But, is there any other proof that the Dance started other than our gestalt of what is happening around town? Well, yes there is.

A great marker for social distancing is the data coming from our cell phone movement. Close examination of this site shows that based on cell phone movement, the Hammer was from mid-March to mid-April. In this article, their data shows a similar time frame, maybe a little later, say late-April. So, we have been in the Dance in many places for at least 2 weeks based on cell phone data (similar to the government ordinances and our (or at least my) gestalt).

I think it is interesting to note that our new cases per day did not increase 14 days after mobility increased. What is going on here? Has the virus’ appetite to replicate changed? Is there something about the science that we fundamentally don’t understand?

Likely not. It’s a great example of how trends and insights can hide inside data. If you look at the numbers in a geographic context, the story makes sense. By pulling out New York the number of cases in the US is rising as would be expected. 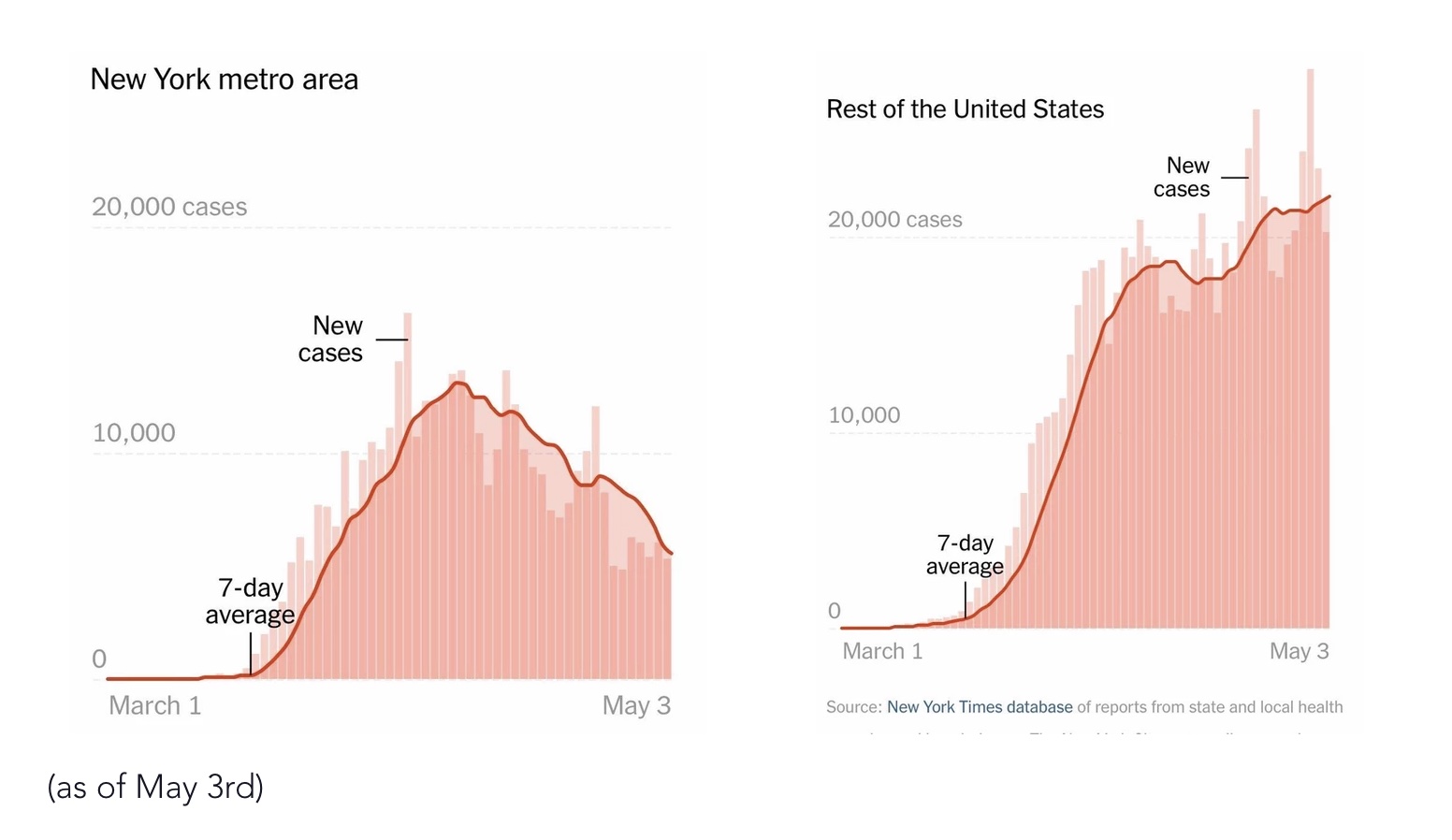 If you go back to the cell phone data and look at the two states where movement is the most restricted, you see New Jersey and NY top the list. Well, that makes sense. As the virus needs human to human contact to spread (or for those humans to have occupied the same space). So places, where people are limiting their movement, will have a lower Rt and as we increase our movement, the Rt will increase. So really NY decline is hiding the rest of the countries incline. Here is an article that looks at each state’s hospitalization rate. You can easily see that looking at the county as a whole is not telling you the whole story.

I can’t recall where I saw the above image for the first time, But, for this letter, I just grabbed it from this article. No less than 24,000 people sent that article to me. It’s a great read, it makes sense, and it provides some data behind a framework to start thinking in terms of high-risk and low-risk transmission behavior. Here is a study that suggests the same. This article covers this all nicely. We must all find our appropriate middle path.

Lastly, a great quote from a LA Times article:

Open-versus-closed is not a dichotomy. It’s more accurate to think of a dimmer dial than an on-off switch, with gradations to avoid undue risk. Another false dichotomy is between public health and economic security. The very best way to get our economy back is to control the virus, and economic stability is incredibly important to the public’s health.

PS: A short letter inside a post-script on conspiracies - People keep asking me to talk about the allegations regarding the over-reporting of deaths related to COVID. Again, with the conspiracy theories! I can assure you that there is not a well-orchestrated plot by hospital administrators to influence doctors to incorrectly categorize non-COVID related deaths as COVID deaths. The data does not suggest that. The US case fatality rate is 5.9% and the world’s case fatality rate is 6.7%. This would need to be a worldwide conspiracy. Additionally, I have referenced in other letters that there is a ton of evidence that points to the fact that deaths are likely being underreported. So sorry, I’m not buying that a significant number of deaths are being fabricated in an effort to commit Medicare fraud.

And, since we are back on conspiracy theories, I’ve come across more clarification regarding the “Plandemic” saga. The virologists on TWiV spend some time here on the subject, and here is the article that goes point of which they refer. It’s very interesting to hear virus experts talk about this situation. Additionally, the New York Times writes about the conspiracy.

A short muse… “there is a certain comfort in conspiracy theories.”